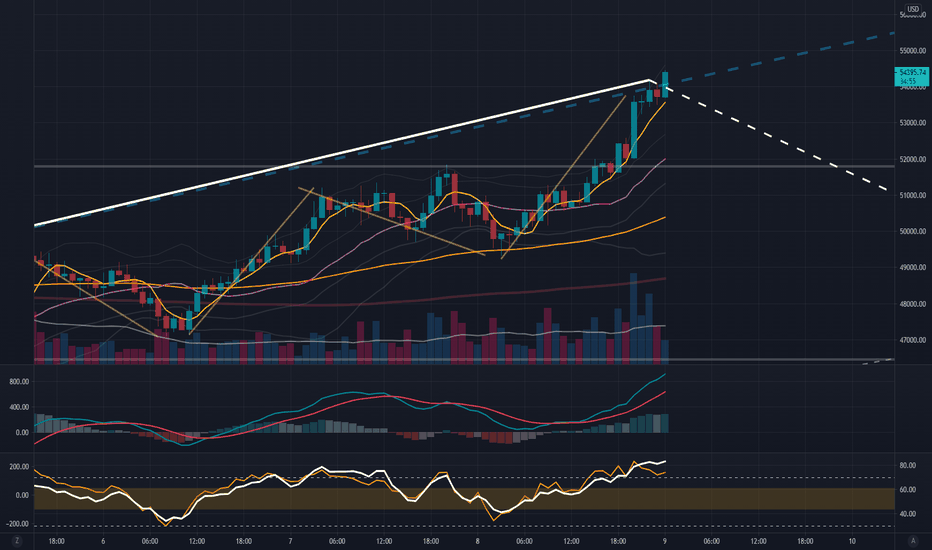 Ok we’re at the end of the corrective wave inside the second leg of our white correction down towards the 40k level.
It’s still early so anything could happen here, but the main reasons why I’m still leaning towards a drop are:

To believe we’re continuing the blue line upwards as an impulse wave on the biggest trend, I would expect a new wave structure to form after this yellow ends above the 55k range,
holding support of price levels near this range before creating a new big wave upwards. Until this second wave above / near 55k is formed, I’ll believe we’re in the white correction.

The next 2hour / 4hour candles will clearly determine the direction bitcoin takes,
I’m hoping we’ll see bitcoin beginning to form the leg down by pre market hours tomorrow and we can start taking advantage of drops in related stocks.
If this does happen, resist jumping right in, set limit orders to very low resistance levels in your respective stocks!
We will only be beginning the drop, I doubt we see a bottom until near end of week, if we do in fact goes towards 40k the drops in the stocks will be significant.

I’ll be waiting along with you to grab buckets of this dip, we’ll need it for the tendies coming April or March – Cheers!